Crazy About These Books!

I have a confession to make - I usually do not choose to read Chick Lit or RomCom sequels. In Chick Lit and RomCom, a romance is usually central to the plot. So, when the couple gets together at the end of the book, I tend to lose interest in their story. Discovering each other, understanding each other, and finally getting together with each other is, for me, the culmination of the story, the end of the arc. I am seldom interested enough in the characters themselves to read about the trials and tribulations of their relationship, wedding plans, marriage, and babies. I have nothing against these books, and I know books like these can be very successful and I rejoice in the authors' successes, but these stories tend not to be my cup of tea.

But then I met Anna and Matt.

In Annabelle Costa's Chick Lit novel Crazy in Love, Anna works on her OCD so she can have a relationship with Matt, her kind, gorgeous co-worker who suffers more and more from multiple sclerosis. Their stories are deftly told with humor, compassion, romance, and more humor, building up to the story's wonderful ending.

So usually, I would have no interest in reading more about Anna and Matt. But these characters are so quirky, charming, real, and interesting that I just want to read more more more about them!!!!!

And at midnight tonight, the sequel to Crazy in Love - Baby Crazy - becomes available. Yay!!!!!!!!!! Here is the blurb from Amazon:

Reasons why Anna Harper never wanted to have children:-- The lifetime cost of raising a child is a quarter of a million dollars.--The baby might vomit. And then she would have to have the entire house sterilized.--What if while she was driving in the car, the baby managed to open its car seat, and then she got into an accident while the baby was out of the car seat?--What if the baby doesn’t like her? After all, she has observed that most people don’t.Reasons why Anna Harper has started trying for a baby:--Her husband is baby crazy. And it’s beginning to seem like he can’t be happy without one.This is Book 2 of the Matt & Anna series.

I am so excited about reading this book! I really want to see what Anna and Matt's marriage is like and I am looking forward to reading about all of Anna's unique and interesting and delightfully funny hurdles with Matt.

It is such a wonderful thing when a book is so good it knocks you right out of your comfort zone and into a delightfully new place. This feeling of warm anticipation reminds me of how I felt after I read Ender's Game by Orson Scott Card and just before I read its sequel, Speaker for the Dead. Even though I do not usually read science fiction, I adored these books! And after reading the first, I could not wait to get to the second!

And now ... Baby Crazy is about to become available. Oh, what reading pleasure awaits us all!

Posted by Geralyn Corcillo at 9:15 PM No comments:

SUCH a Good Book!

To me, the hallmark of a good book is that it does not let me go: I keep thinking about the lives of the characters long after I've read the final page and closed the book.

And The BestMan by Annabelle Costa definitely fits the bill for a good book! 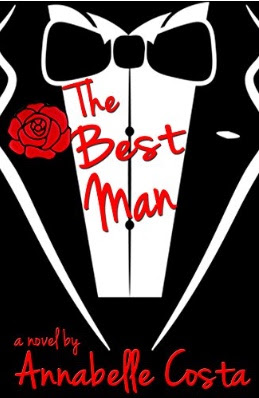 For days I have been daydreaming about the lives of Kirby and John - their hopes, their dreams, their careers, their future. The book begins like many chick lit books ...

Kirby is tired of being single. So when Kirby’s long distance boyfriend Ted pops the question, her answer is an eager “YES.”
Then Kirby meets Ted’s best man, John.

But then Costa throws in a twist:John is obnoxious, he’s opinionated, and he uses his disability as an excuse to keep everyone at arm’s length.

Then Costa's brilliance takes off as she weaves a love story with humor, wit, and boundless depth.

But as the wedding planning proceeds, Kirby gets to know John better and realizes she’s never met any guy she’s connected with more—not in her entire life.

What do you do about your wedding when you’re falling in love with the best man?

Here are 8 things that I absolutelt ADORE about this book:

1. I love that the chapters jog between the heroine and hero's perspectives. After the first meeting, John comes off as SUCH A JERK, but then we get his perspective which is so humorous and eye-opening.

2. This is a love story in its truest form - like a flower blossoming, this story unfurls the deepening friendship and romance petal by gorgeous, sometimes thorny, petal.

3. This book is so funny! I laughed and guffawed out loud at some points at Costa's way of turning a phrase!
4. The view into John's life as a paraplegic - a young man injured in a car accident at 25 - is soulful, enlightening, and sometimes, heart-breakingly shocking. And I read in Costa's bio that she is a physical therapist so I know she knows what she is talking about.
5. I love the way John loves Kirby. He adores her fuller figure, he totally supports her in her career, he loves her quirky take on life.
6. I love the way the story unfolds through point and counterpoint in the different perspectives. Ex: Kirby keeps thinking about how much weight she has to lose before the wedding, but John thinks she is so gorgeous exactly as she is. John knows he will never have a snowball's chance in hell with someone as amazing as Kirby, but Kirby just keeps thinking about John more and more.
7. So sexy and romantic! The friendship develops with such a brilliantly paced slow burn that the culminating moments are just so good!
8. I love stories that show the difference between picture-perfect romance and, well, love.

If you indulge in The Best Man, I hope you enjoy it!

* The text in red is taken from the book's description on Amazon.

Posted by Geralyn Corcillo at 9:20 PM No comments:

I've won many awards for my books, but I always find out I've won online. But in 2009 I attended the Los Angeles Comedy Short Awards because my husband TV writer Ron Corcillo had a short film up for Best Comedy Short. His category came up, presented by comedic actresses Mindy Sterling (Austin Powers) and Wendy McClendon Covey (Bridesmaids). They did some comedy riffing ... read the nominees ... and then ... announced that Ron's film Daryl From OnCar was the winner! I never screamed so loudly in my  life!  So, I am always happy for people who win Oscars because I kinda have an inkling of what that moment feels like. And  I am always even happier for the winners if their work through the years has touched me in some way. Hey, if their work has made me happy at some point, I am doubly happy for their success.

So, every year I look at the list of winners and it gets me thinking about all the ways they've delighted me through the years. Certain wins just tug at threads, reminding me of some cherished entertainment.

So what threads am I tugging at today as I look at last night's Oscar winners?

I've seen Sam Rockwell in so many wonderful movies through the years, from Confessions of a Dangerous Mind to Frost/Nixon, but as soon as I saw that he won, I shouted to Ron, "Someone from Galaxy Quest won!" Galaxy Quest is a wonderful movie that pays off in absolutely every respect. Has-been actors from a cult sci-fi show get called into space by  aliens who've seen their show, think it's real, and want the actors to use their space-fighting prowess to help them save their planet from evil monsters. This hilarious movie also subtly and brilliantly touches on ideas of romance, friendship, loyalty,  hope, determination, hero worship, what it means to be a hero. I remember when I first saw it, I had NO IDEA what  it was about or anything, but man, if blew me outta the water. And Sam Rockwell is perfect as Guy, the "nobody" on the show so he is sure he is doomed to be killed off first.

Gosh, I am so happy for Jordan Peele. I especially love it when someone who's known for one thing goes and wins an Oscar in something different - like when Keith Carradine won the Oscar for Best Song for writing I'm Easy for the 1975 film Nashville. Peele won for Best Original Screenplay, but like many people, I know him from his comedy team Key and Peele, along with Keegan-Michael Key -- I found them both especially delightful in Keanu, a comedy about two middle class guys who have to track down gangsters in order to get back Keanu, Peele's kitten who is kidnapped by drug dealers. Keanu also stars Nia Long, who I first came to adore when I saw her in the movie The Secret Laughter of Women with Colin Firth.  And Jordan Peele is married to Chelsea Peretti, who I love on the TV show Brooklyn 99!

Frances McDormand! Yay!!!!!!!!!!! What an amazing actress! On my very first date with Ron, we rented the movie Frances McDormand won her first Oscar for, Fargo. Oh, and she was just too delightful in Almost Famous: "My son has been kidnapped by a rock and roll band!"

And Allison Janney! In most things I see her in, she plays a supporting role. But no matter how small the role, she makes whatever she is in just that much more AWESOME! The romance novel-writing guidance counselor in 10 Things I Hate About You, the prudish Prudy in Hairspray, the tell-it-like-it-is mom in Juno (where she co-stars with J.K. Simmons, who won an Oscar a few years ago), the divorced mom to Mandy Moore's angst-riddled teen in the wonderful movie How to Deal and as the literature professor who doesn't think much of Hugh Grant and his Hollywood ways in The Rewrite - a quiet little movie that stars a bevy of Oscar winners: Janney, J.k. Simmons, and Marisa Tomei. A has-been screenwriter who takes a job teaching a screenwriting class at a small college on the East Coast -- oh, it is so delightful!

What delighted you at this year's Oscars?
Posted by Geralyn Corcillo at 12:08 PM No comments:

Second Guessing by Gail Ward Olmsted chronicles the romance of rock and roll widow Jill and her new ex-boy band love, Ben. This new release is the sequel to Guessing at Normal, but this book totally reads as a stand-alone novel as Jill navigates her way through family, career, and love challenges.

Second Guessing begins as an exciting and indulgently satisfying romance. Jill Griffin – after a lifetime of riding a roller coaster of love with the ultimate bad boy – finds a second chance at love with a sweet and sexy good boy – go Jill! And Ben is adorably charming. Following their unfolding romance as it tries to hide from the glaring lights of the paparazzi is pure delight. And Jill’s relationship with her daughter Carly serves as a strong backbone for the story of Jill’s life. But the path of true love hits some bumps, and the ending ramps up to an exciting and suspenseful finish! Hints of menace are cleverly planted throughout the book so that danger to both body and soul keeps you turning the pages! Second Guessing is a must-read for anyone who’s enjoyed Guessing at Normal, and it serves as a wonderful stand-alone story even if you haven’t read the first. What an enjoyable read!

And you will love Gail's other books, too!! 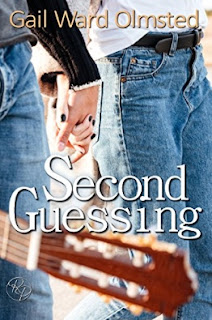 Posted by Geralyn Corcillo at 11:56 PM No comments: