You know the feeling...after a long, tough day, you just want to sink into a hot, sudsy bath, sipping an icy drink and popping chocolates into your mouth, letting them melt on your tongue. Mmmrrh...such is the delectable, relaxing feeling you get reading To Love Twice by Heather McCoubrey. Kate Walker lives through strife and tragedy, staying strong and resilient for the sake of her new-born daughter. Five years later, life is good but challenging - Kate kicks butt at her demanding, yet rewarding, job as she works to make a happy home for herself and her daughter Mary. Life has settled down...but is that all there is? Kate has decided to be satisfied with creating happiness for others.

Edward is a nice guy. And McCoubrey makes that just so damn irresistible. McCoubrey has already so vividly fleshed out Kate's character that when Edward appears, it is crystal clear just how much Kate needs...him.

But wait. It gets better!

Edward is fantasy fulfillment for Kate, yes. But even better? Kate is exactly what Edward craves in his life...a secret life that McCoubrey reveals layer by layer.

Throughout the book, McCoubrey uses metaphors of delectable food to echo the development of the relationship. The pair eat dinner together quite a bit, snatching whatever time together they can in their busy, disparate lives, and their dinners are amazing and so beautifully described. And that is how their bond develops – as the time out of their lives, delicious moments when they can just savor one another...Their love comes softly, but it is impossible not to want this happiness for them both.

The surprise twist at the end is PERFECT! Tense, suspenseful, deeply engaging...and even though it is a surprise, it is grounded in the story so artfully. You never see it coming, but once it does, it all makes perfect sense. McCoubrey gets daring with her choices at the end, and it WORKS!


To Love Twice is a sweet, soothing read. It is emotionally compelling and relaxing for the soul. Mmmrrh...


After enjoying To Love Twice, I got in touch with Heather, and we soon became author buddies, celebrating each other's triumphs, commiserating over disappointments, venting our frustrations, and giggling over shared delight. And I so enjoy Heather's blog - she helps me relax with her musings on life and inspires me to find balance and time to write in my hectic life as an indie author! 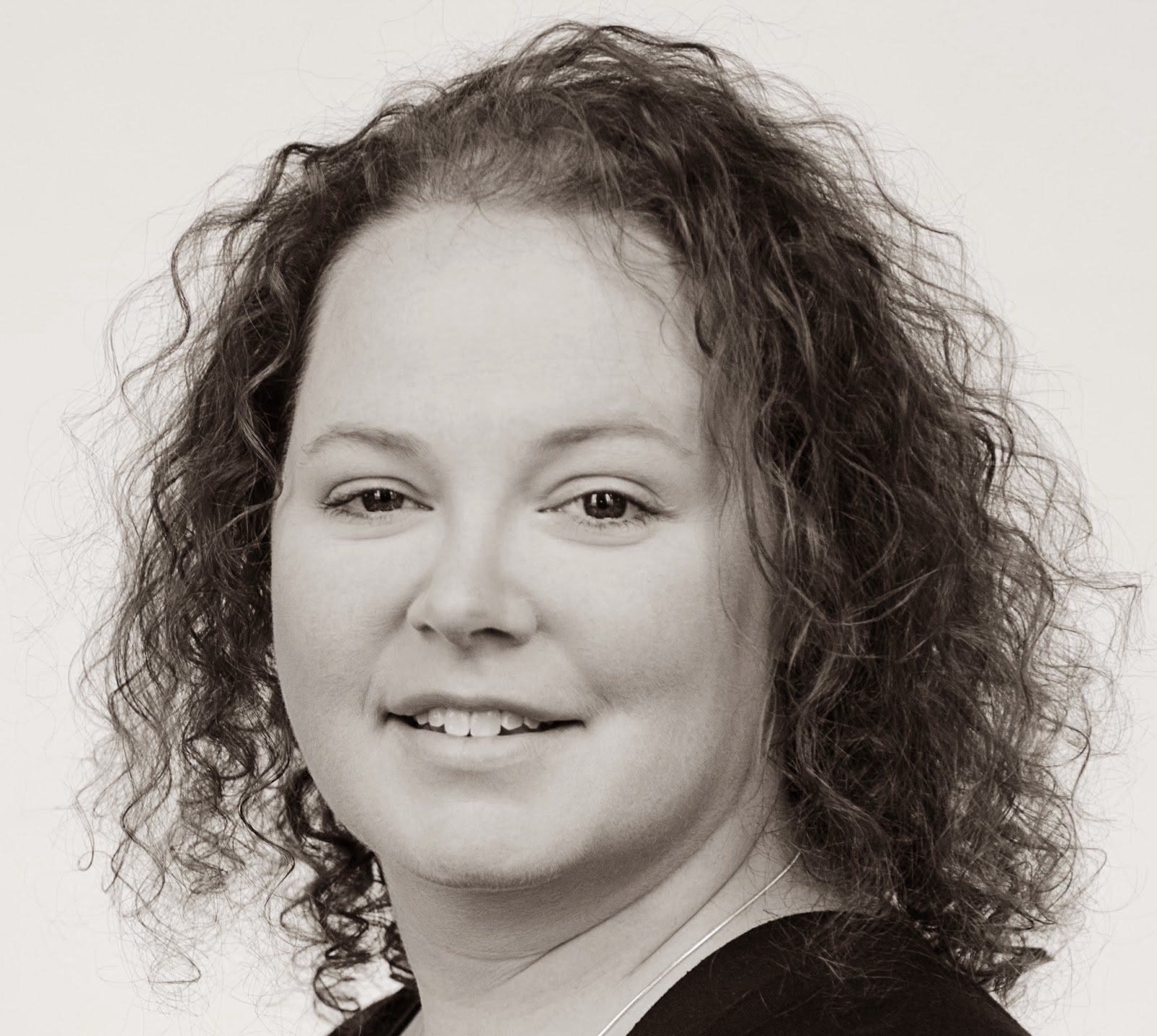 And yes, I'll admit it, Heather is a Patriots fan - - - a Patriots fan!!! I, as you know, am a die hard fan of The New York Giants, but still, we like each other :) A lot more than Tom Brady likes Eli Manning, that's for sure! And guess what? Heather and I both have Pennsylvania in common! I grew up there, and Heather lives there now her husband, two children, Rex the chihuahua, and Fatty the goldfish.

But you don't have to go all the way to Pennsylvania!
You can find Heather McCoubrey on:

I cannot wait for Heather's next novel, Back to December! After surviving an abusive childhood, Anna Blackhurst is finally ready to tentatively step into life, and into the world of Cooper Reed. But when her mother is in a terrible accident, Anna feels herself getting sucked back into the nightmare relationship that defined her childhood. Cooper is there for her, but is Anna strong enough to feel worthy of his love? Will she ever break free from the chains of torment that have been holding her down her whole life? Anna has to find the courage to love herself if she and Cooper are to have any chance of loving each other. 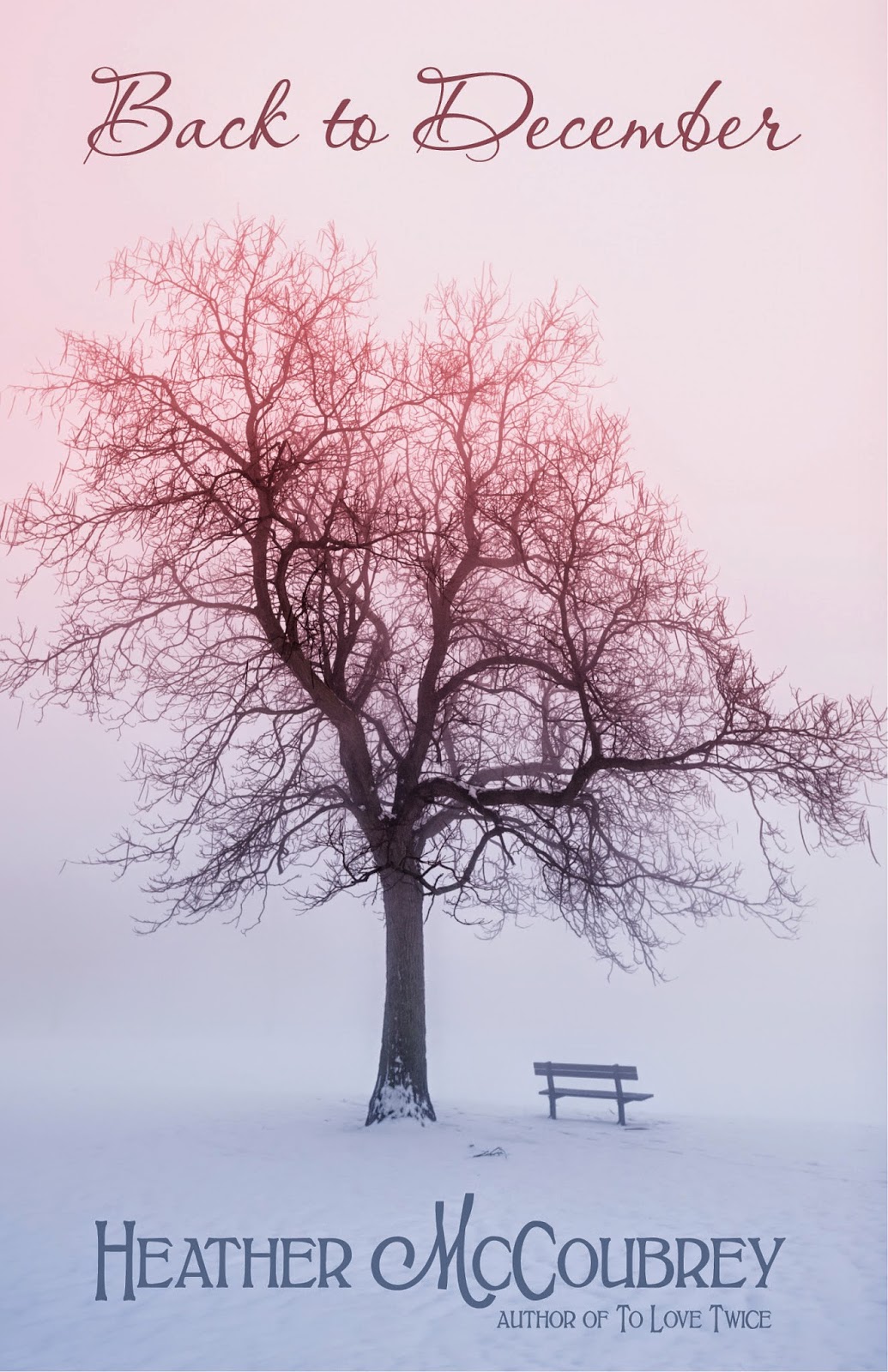 Posted by Geralyn Corcillo at 4:33 AM 5 comments:

Red the Were Hunter
by Rebekah R. Ganiere 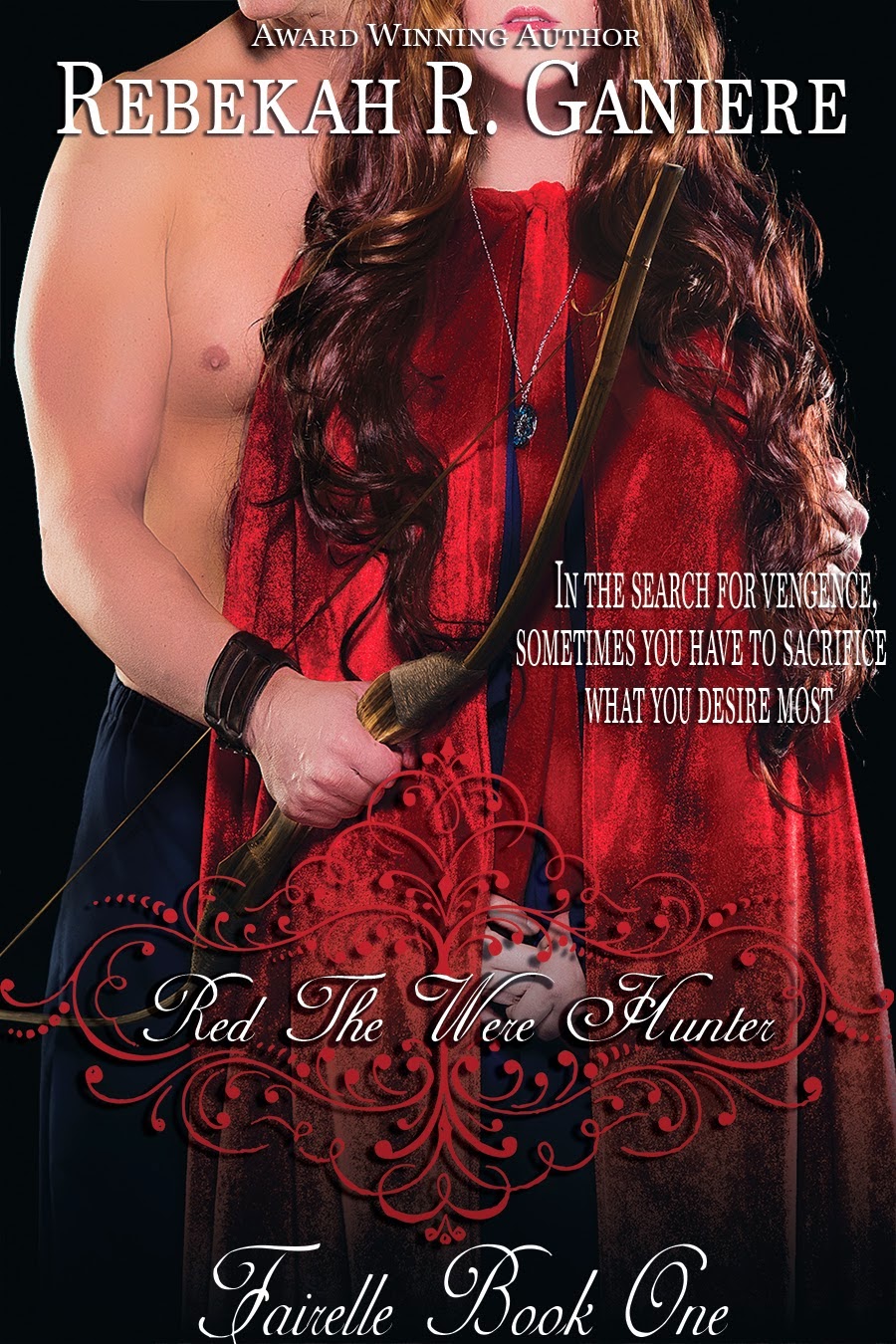 Red The WereHunter won 2nd Place in the
Hook, Line and Sinker Contest and is a current finalist in the Great Beginnings Contest.


Another girl had been taken. One moment the small village of Volkzene was silent, with Redlynn drifting off to sleep to the rhythmical sounds of her clock ticking; the next a scream pierced the night.

Redlynn leapt from her bed, grabbed her sword, and tore out to the street. People in their nightclothes, brandishing torches and lanterns, filled the village center.

“Where are they?” she called at the nearest neighbor.

“Cantrel's.” The woman ran for the safety of her home.

Anya! Redlynn sprinted toward the south edge of the village. Her best friend was on guard alone at the Cantrel's hut. Breathing hard, the cold night wind whipped her wavy, red hair into her face and raised goose bumps on her skin. The sound of her blood pumping in her ears drowned out the buzz of the village folk.

Redlynn charged through the crowd gathered outside the hut. “Move,” she yelled. The other members of the Sisterhood and villagers backed away at the sight of her.

The smell of blood hit her. She stepped over the threshold, the horror slapping her with force. Her heart faltered and a cry escaped her lips.

Anya's mangled body lay sprawled on the floor, her bow still clutched in her fingers. Redlynn's mind numbed, unable to process the scene. She spun slowly on the spot. An arrow stuck in the wall next to the door. Bits of wood were strewn about from the smashed kitchen table. Coals tumbled from the fire, and little more than charred cinders remained of the curtains. A pail of water lay discarded nearby. The Cantrels huddled on their bed in the adjoining room, Mrs. Cantrel sobbed into her husband's chest.

Anger and despair ripped through Redlynn's gut. Her sword hit the floor with a clatter and she collapsed to her knees, gathering her best friend's bloody body in her arms. She sucked in large gasps of air, tears streaming down her cheeks. The very last of my loved ones.

Anya stared blankly into the night, her eyes transfixed and cloudy. Redlynn stroked her hair and tried in vain to piece the skin together on Anya's neck and torso. At just nineteen, Anya had been through so much in her short life. Too much, and now it was over. Sadness gave way to anger, and bile scorched her throat.

“This is your fault,” Mrs. Cantrel screeched, pointing at Redlynn. “Where were you? You were supposed to stand guard with Anya.”

“Find her? Those beasts have probably already torn her to bits. You're the protector, and where were you? Asleep. To let my Sasha be taken, and poor Anya to be murdered. If you can’t even do the one thing we've kept you around for, what good are you?”

The desperate, passionate tale of one huntress - her quest and her destiny. And how worlds and hearts collide and shatter when she pursues both...


Redlynn of Volkzene, member of the Sisterhood of Red, is heartbroken to discover another girl kidnapped and her best friend slain by werewolves. Defying the head of her order, she sets out to kill the beast she believes responsible. The King of the Weres-- But there are worse things in Wolvenglen Forest than the wolves.

Adrian, reluctant heir to the throne of Wolvenglen, and his band of wolf brothers are bound to protect the humans; especially the Sisterhood. Finding Redlynn unconscious in his woods, awakens in him a passion he's never before experienced and a protective instinct that has him ready to turn on his own men. Problem is, a female is the last thing Adrian needs complicating his life.

But all is not as it seems in Wolvenglen Forest and to save the missing girls before time runs out, Redlynn and Adrian must move past their inner demons and learn to trust each other. In the search for vengeance however, sometimes you must give up what you desire most.

What if you were the key to an ancient prophecy that would begin to heal your lands, but fulfilling your destiny meant you had to turn your back on everything you'd been taught to believe in?

When I read this book...

Red the Were Hunter is a twist on a twist of an age-old fairy tale.  Red is no little girl in the woods, but a fiery huntress hell bent on avenging her beloved friend and slaying the king of the Weres. Adrian is no vicious girl-eater, but a prince and protector. But this book is not the non-stop, adrenaline-infused bloodbath you might expect. Because despite the hunting instincts of both leads and the visceral animal attraction between the two, this book focuses more on the very real and very vulnerable sides of Red and Adrian. Notice how the book begins - with Redlynn experiencing loss, frustration, and grief. As the story progresses, Redlynn deals with injury and debilitating fever, giving her character time to weigh, question, fall (in love maybe? So fast? With a dark and mysterious man she just met?) and grow impatient enough to charge headlong into danger. Adrian is a tortured soul, contemplating his destiny, every choice he makes, and what it will mean to his people. These two will not only have to fight their foes in the forest, but battle their own demons and doubts if there is any hope for their future, and the future of their people.

Red the Were Hunter is an delightful read. Though epic and mystic, and couched enough in an old-fashioned setting to have the characters wearing "breeches" and drinking "mead," they speak in everyday language, making the story accessible and easy to jump right into.

This is a compelling story not only exploring battles, betrayals, passion, and pain, but following Redlynn on her journey to either accept of reject her destiny - a destiny that is just one part of books to come involving other realms of the supernatural Fairelle.

In the mood for werewolves, epic prophesies, and two tortured heroes trying to do the right thing? Check out Red the Were Hunter by Rebekah R. Ganiere.

A little something about Rebekah R. Ganiere...

Rebekah is an award winning author. Her first novel Dead Awakenings, debuted in January 2014. Red the Were Hunter, the first in her Farielle Series, is now available. Her trilogy The Society 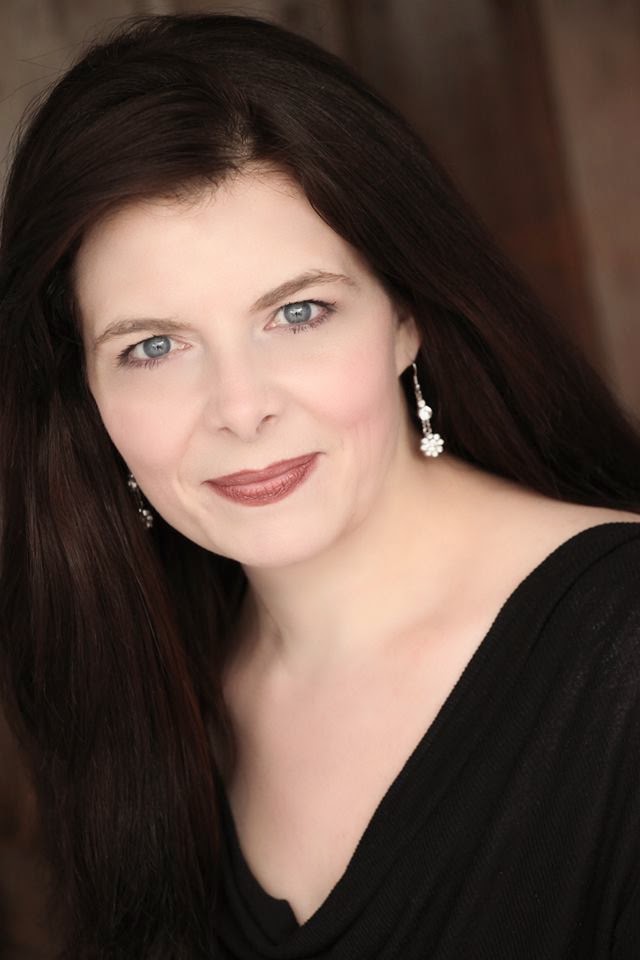 will be released in early 2015 by Kensington's Lyrical Press. Rebekah is the VP of Communications of the RWA FFP Chapter as well as a member of her local Los Angeles and Orange County Chapters. In her spare time when she isn't writing you can find her moderating on Savvy Authors.com and in her local SCV Writers group, or hanging out with her husband, four children and dog, rabbit, two bearded dragons, three tortoises and a handful of fish. The escaped snake has yet to be found.
Posted by Geralyn Corcillo at 3:23 AM 1 comment: