In Beyond Control, bestselling author Kat Martin goes from sexy romance to mile-a-minute suspense as she interweaves compelling characters and well-crafted plots all to culminate in a thrilling, immensely satisfying ending! 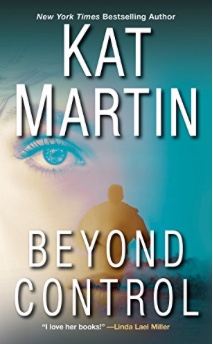 "When Victoria Bradford got engaged, she told herself to give love a chance. Six months later, she’s on the run from her angry, abusive ex-fiancé with her four-year-old daughter and nowhere to go.

Seventy miles north of Dallas, the Iron River Ranch is pretty much nowhere. That’s what its new owner, Josh Cain, wanted when he came back from Afghanistan. Big skies, quiet nights, no trouble.

One look tells Josh the pretty redhead with the adorable little girl will give him trouble of the most personal kind. But he’s seen trouble before, and he doesn’t scare easy. Not when “accidents” start happening around the ranch. Not when Tory’s best friend back in Phoenix is abducted and brutalized. Not even when it looks like their current problems are only the tip of the iceberg.

But if he gets too close to fierce, determined Tory, Josh knows his nights are going to be anything but quiet. And that’s one possibility no amount of training
can prepare him for . . ." --From the Amazon description
In this book, Kat Martin weaves together compelling characters and well-crafted plots, all to culminate in a thrilling, immensely satisfying ending.
When Josh Cain meets Tory Ford (aka Victoria Bradford), he quite likes her fiery red hair and cute behind. But that’s after we’ve already seen Tory’s true worth: her strength and courage shine through in the opening scene when she stands up to her monster of a fiancé Damon, a man who believes he owns Tory lock, stock, and barrel. Tory survives his nearly fatal beating, escapes, and keeps on surviving.
Once she gets to the Iron River Ranch, the attraction between Tory and Josh simmers and sizzles. We get heart-wrenching and thought-provoking glimpses into Josh’s heroic military career, a career that haunts him… in more ways than one. We meet the tough and charming Clara Thompson, the baby-sitting neighbor who can be trusted to the hills and back. We get to know the eminently likable Cole and Noah, former marines who work on Josh’s ranch. And we are introduced to Satan’s Star, a troubled stallion who has suffered, like Tory, at the hands of an abusive man.
But this warm, romantic, and exciting story becomes chilling as chapters from Damon’s POV begin creeping in as he hunts for Tory. He beats women, rapes women, and kills with abandon. When Damon gleefully and arrogantly kidnaps and rapes one of his victims, this scene is intercut with the sexual culmination of the flirtation between Tory and Josh. While the juxtaposition of sickening brutality with incandescent romance is viscerally disturbing, it is also ingenious in how it undercuts the romance, shifting the focus of the book away from the relationship between Tory and Josh and onto the battles both are facing as they try to elude and conquer the bad guys in their lives. The lovers must stop the villains and the story kicks into hyper-drive.
Josh’s friends and family circle around Josh and Tory, helping them both ward off and fight the evil blasting at them from all directions. The camaraderie is heartwarming; the suspense is so compelling it will have you flipping pages with the speed of a stallion.
And the ending? It is breath-taking, comprised of brilliance and absolute perfection in the narrative. And even to hint at it would be to do this tightly woven story a disservice.
Beyond Control is available starting TODAY!! Happy reading!
Posted by Geralyn Corcillo at 11:43 PM No comments: