Mmmrrh ... pull up a chair and settle in to make jewelry as you chat and bond, lick wounds and discover new doors, break up and fall in  love ... and unravel a mystery with the women of The Port Elspeth Jewelry Making Club by Holly Tierney-Bedord. 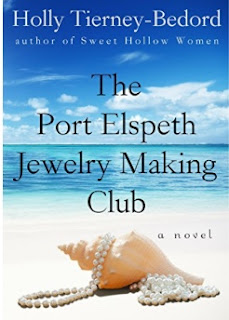 From the Book Description:
It's been five years since the idyllic oceanside town of Port Elspeth was rocked by tragedy. Shortly after their high school graduation, Evangeline Maddingly, daughter of one of the town's wealthiest old-money families, and Oliver Prescott, son of one of the town's wealthiest new-money families, were found dead in an isolated cabin in the woods outside of town. The circumstances surrounding their untimely deaths are murky at best, thanks in large part to a coroner with connections to the town's founding families and a sweeping effort from those in power to shut down any negative publicity that could harm the reputation of their pristine community.

A small group of strangers gather to create jewelry for one of Port Elspeth's many fundraisers. Before long, friendships are forming and old secrets are being revealed. Along with solving the mystery of how to make a perfect pair of chandelier earrings or cabochon necklace, these unlikely friends find themselves at the heart of solving the murders that took place half a decade earlier.

This book sweeps you away with shades of The Jane Austen Book Club and piques your interest in ways reminiscent of The Bletchley Circle. As the women meet, ostensibly to make jewelry, they learn about their own lives and loves and make decisions that change everything. And one of those decisions is to solve an unsolved murder in the community.

The Port Elspeth Jewelry Making Club follows the lives of six women – one teenager, one woman in her twenties, two women in their thirties, one woman in her fifties, and one woman in her seventies. We become immersed in their relationships with lovers and family members in all their glory and ignominy. This comfortably intimate novel makes you feel as if you are a part of the club as you piece together dangly earrings, smile at a new friend you feel like you’ve known forever, cringe at flashes of boorishness, and feel chills slide down your neck as you realize a killer is on the loose from a murder that no one ever tried to solve. After all, to delve into the crime, in a place such as Port Elspeth, involving such renowned families, just would have been too, too gauche. But Cadence, the founder of the club, is new to town. And all the other club members have quirks in their lives that allow these craft club meetings to turn into stealthy investigations.

What begins as a compelling voyage into the lives of six very different women escalates into an edge-of-your seat hunt for a killer! Because whether it is fashioning bracelets or making justice happen, these women get the job done. In The Port Elspeth Jewelry Making Club, jewelry, and life, is what you make of it, with your own talent and instinct, but more importantly, with the love and support of others.

Holly Tierney-Bedord, a gifted story-teller, has given us yet another gem!
Posted by Geralyn Corcillo at 4:09 PM No comments: