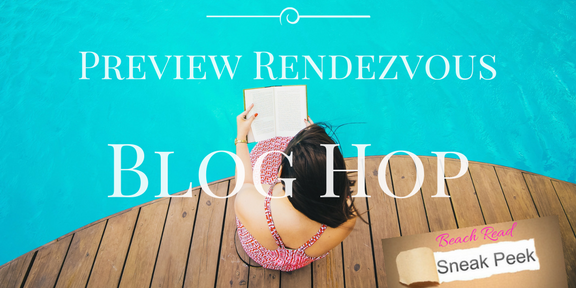 Welcome to the Blog Hop, Wonderful Readers! On this hop, you will read exclusive content from romantic comedy authors - excerpts not available anywhere else but in the book itself. You will also get several chances to win some books and gift cards.

In this blog post, you will get to read some exclusive content from my Amazon bestselling and award-winning romantic comedy novel, Queen of the Universe. At the end of the exclusive excerpt, you will be able to enter to win a $10 Amazon card. The winner will be chosen by random drawing. 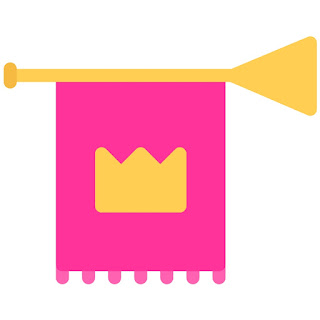 I present to you, Queen of the Universe 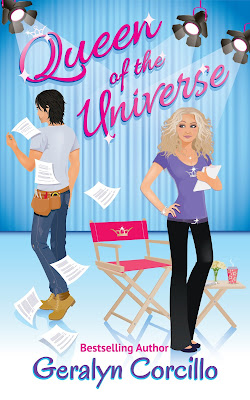 Wait, wait, wait. I'm afraid I'm giving you the wrong impression, lavishing all this fanfare on my character Lola Scott, The Queen herself. But her counterpart in the book - Arlen Black - is a heralded character in his own right, having recently won the title of 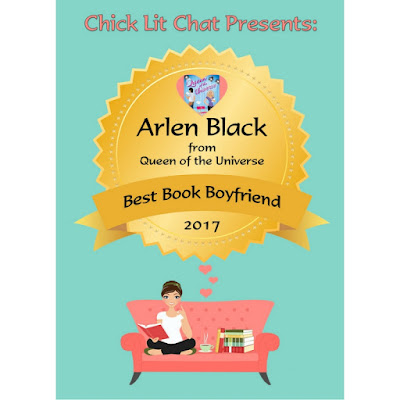 Now, the relationship between these two begins innocently enough ... 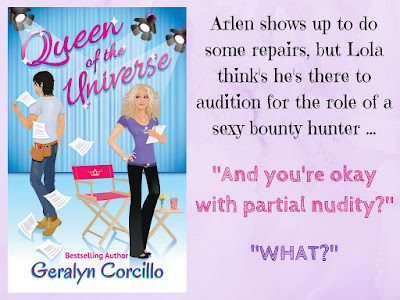 He's not there to do the show, but Lola gets him to audition anyway ... 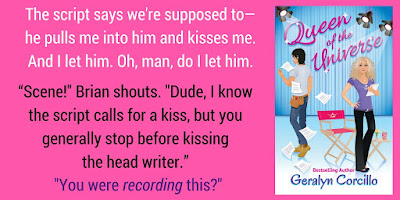 Arlen nails the audition, but he wants nothing to do with Lola's show. But Lola's found her perfect leading man, and she's not going to let him get away ... 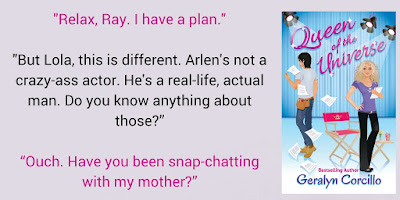 Lola's plan fails miserably. Arlen finds out she's been lying,
how she tricked him ...
and there were more kisses after that audition ...
But then, just when Lola's about to lose everything, Arlen agrees to be her leading man and saves the show. When supposedly he can't stand her.
And that's when things start getting more intense, twisting and turning. Because Lola isn't just dealing with a leading man, she's dealing with a real-life, actual man. With a history she didn't write and a past she could never imagine.

From Queen of the Universe:

Arlen whacked the hammer so hard that the reverberation cracked one of the roof tiles to his right. He sat back on his heels, wiping the sweat from his face with his forearm. He could fasten the tar paper to the roof with little more than thumb tacks—he didn't need to attack Lola's roof with the force of a jackhammer. What the hell was wrong with him? Destroying the house he was working on wouldn't solve anything.
When shooting had wrapped at five, Arlen couldn't drive fast enough to get to Lola's house and work off the day's thunderous tension. Why on earth did they have to make him kiss Wendy so many times? And with Lola watching? All he could think of during the scene was Lola on the first day they met, Lola on the patio, Lola kissing him on her bed. But the second he'd touched the tiny, bony Wendy Hunter, every nerve in him rebelled. Apparently, though, his bucking emotions had infused the kiss with an almost angry tension that Peg had found “absolutely blistering.” Whatever. But Jesus, he didn't want to want Lola.
Maybe he shouldn't have come to her house. But where else was he going to go to tear things apart and beat them to a pulp? This was his job for the next few weeks as far as anyone knew—he hadn't told a soul about his doing the show and playing Sam. It was all too weird.
And the whole situation was making him feel guilty. He used to have so much fun with Katie, Matteo, and Ella watching Wendy on Ups and Downs. And now he was actually working with her every day—and he hadn't said a word to the kids. How could he? If he tried to explain what he was doing and why, he would at some point have to reveal what a complete wreck of a human being he had become since he lost them. He would not do that.
God, he needed to pound something with a sledgehammer for about an hour.
Or maybe he could just use the solitude to find some sort of equilibrium.
Arlen barked out a gruff laugh. Yeah, like that was going to happen. He slipped his hammer into his tool belt and climbed down the ladder. He walked around to the back of the house where he took off his tool belt, work boots, and socks. Without even a second of hesitation, he dove into Lola's pool.
It was hard doing laps in wet clothes, but he managed ten before dragging himself out of the pool. Damn, he was tired. So tired.
He stood up dripping wet, raised his arms above his head, closed his eyes, and stretched. Stretched his tendons to the limit, trying to push the day's tightness out of his muscles. When he eased up and opened his eyes, he saw Lola standing across the patio, staring at him.
“Arlen?”
He stood there and didn't say anything.
“What are you doing in my pool?”
“Fixing the roof.”
She shook her head. “In the pool?”
“I got hot up on the roof and jumped in the pool to cool down.”
“Are you kidding?” She looked at his tool belt and boots a few feet off to the right. “You're an actor on the show. You don't have to work on my house any more.”
“You hired me to work on your house. That's how we met. Remember?”
“It's just that—” Lola began, “I thought you'd quit working here once the show went into production.”
Arlen sat on a lounge chair to start tugging on his socks and boots. “I'm not an actor, Lola. Working on houses isn't my filler between gigs. This is what I do.” He stood up and buckled his tool belt around his hips. “You hired me to do repairs around the place, and now that the pilot is in production, I'm betting you can keep that promise about never being home.”
Lola blew out a frustrated sigh. “It would be easier if we kept our relationship professional.”
“This is professional,” Arlen said. “My profession.”
“I can't figure you out.”
“Don't try.” Arlen headed out to the driveway. “I'm finished here for today.”
“Arlen—”
“I'm doing the show, Lola. So quit trying to get in my head.” He wrenched open the truck door.
Raising her chin, Lola put her hands on her hips. “I don't get it. Why are you here if you hate me so much?”
Arlen would have ignored the question if her voice hadn't trembled just a little. “I don't hate you, Lola.” The words were barely past his lips when he realized that she probably made her voice sound tremulous on purpose.
“But you haven't forgiven me.”
Arlen said nothing.
“Then why are you helping me?” she demanded.
Arlen shut the door and faced her. “Because I wanted something once. More than anything. And I didn't get it.”
Lola stepped back.
He took a deep breath. “I didn't want someone else to feel that way. Not if I could prevent it.”
“I see,” she said quietly.


“I hope you do,” Arlen said. Then he got in his truck and left. 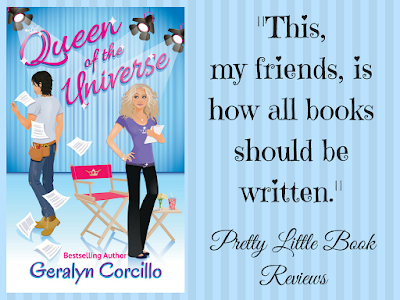 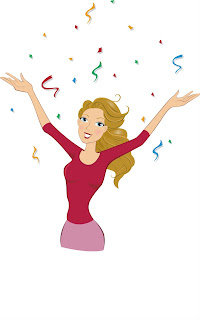 Now for the Prize!

You could win a $10 Amazon gift card!
To enter, all you have to do is follow me on BookBub by clicking here. Then comment on this blog that you followed. That's it! Following me on BookBub means you will be alerted by email once and only once when I have a new release coming out or a book on sale or on freebie. The giveaway is open until June 7 at 11:59 pm. Make sure to check back to this blog on June 8 to see if you've won!

And let the fun continue! Just click on an author's name to hop on over to her blog where you will enjoy another Preview Rendezvous of more exclusive content and more chances to win bookish bling-bling. I hope you discover some enchanting stories and some new favorite authors!

Posted by Geralyn Corcillo at 5:25 PM